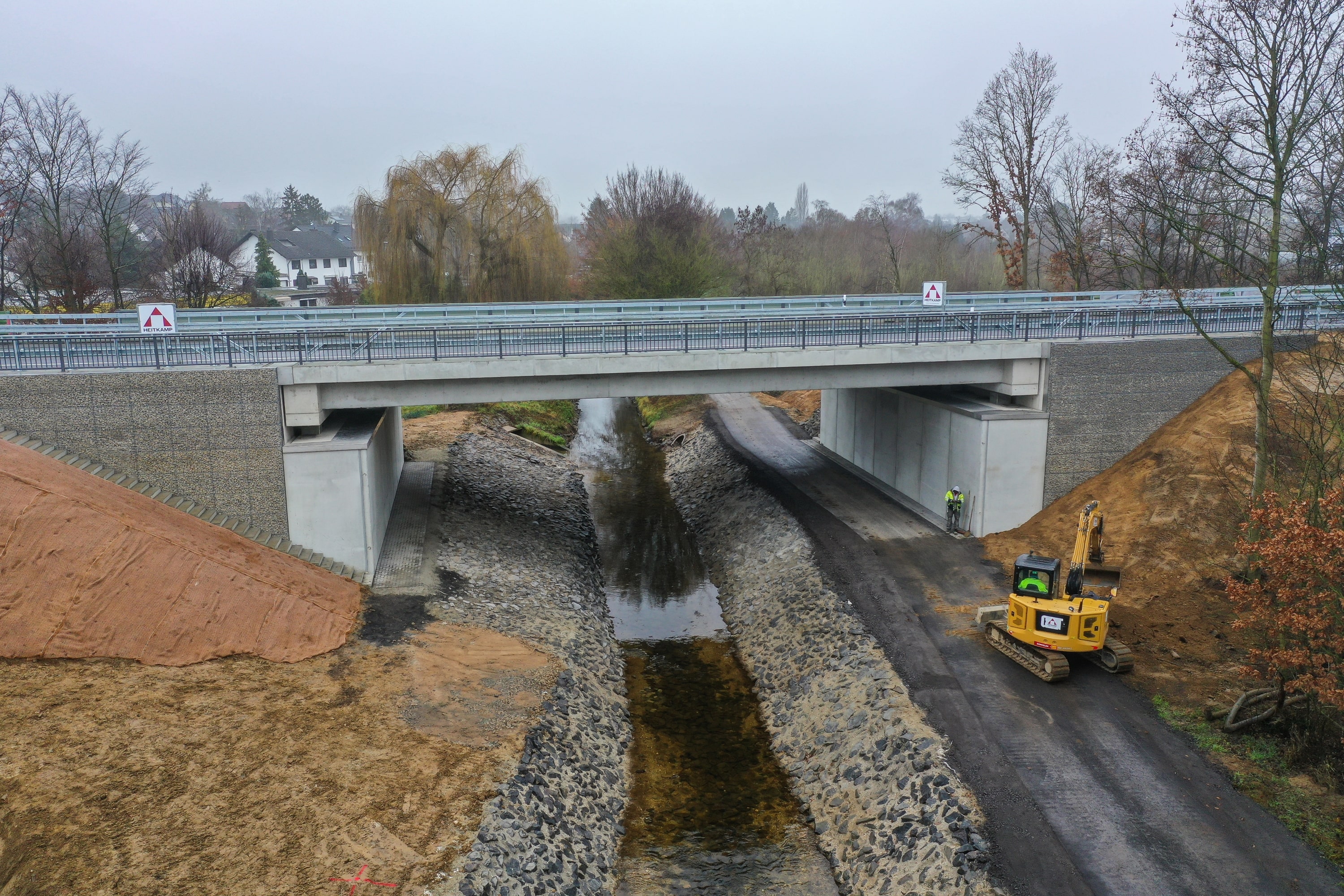 Gescher/Germany, February 2022 – With the increase of extreme weather events, as those recently recorded in parts of Germany (North Rhine-Westphalia and Rhineland-Palatinate) and neighboring European countries, rapid and safe reconstruction measures are required so that local residents and businesses are not restricted in the long term by infrastructural issues. In such exceptional situations, it becomes clear how important it is on the construction side for all parties involved – clients, engineering offices, suppliers and construction companies – to cooperate together so they can push ahead with reconstruction by incorporating safe solutions.

Cleaning up and reconstruction with geosynthetics

During infrastructure reconstruction, geosynthetics can be used in many places to ensure rapid construction progress. For example, urgently needed temporary utility roads, construction roads and work platforms can be quickly and safely constructed with geogrids or reinforcing mesh, even in very soft soils. Temporary storage of waste and contaminated sludge is also possible with geosynthetic contaminant barriers, filters and sludge dewatering hoses to also provide the best possible protection of the environment from the effects of contaminants.

Construction of the Swistbach bridge in Heimerzheim in record time

The construction of the new Swistbach bridge in Heimerzheim (30 km from Cologne), which carries the L182 highway over the Swistbach and thus connects the greater Euskirchen, Swisttal and Bornheim areas, is one of these successful reconstruction projects. Due to the destruction of the old bridge by the flood, a complete new structure was necessary. After a record construction time of just three months, the new bridge was reopened to traffic in December 2021. The Swistbach bridge has not only been built to be stable in the long term, it has also grown by 4.22 m with a total length of 24.30 m between the abutments, thus allowing the riverbed to pass through 4 m wider in the future and thus being better equipped for recurring heavy rainfall events.

This realization was made possible by the innovative fast construction system by the HEITKAMP Group, which was developed together with HUESKER: the HEITKAMP Schnellbruecke® system. The load-bearing columns of the system or the abutments are made of composite flexible geogrids and locally available soils. They form the long-term safe load-bearing heavy-duty elements.

Constructions of geosynthetic-reinforced earth basically allows very fast building of bridge abutments. Unlike in Germany, reinforced-earth structures have been among the standard construction methods used for the majority of infrastructure projects in the Netherlands for a very long time.

By using geogrid and earth construction, the construction time of the bridge abutments was reduced from three months to ten days. By using fewer resources and transporting fewer materials, CO2 was also saved. It is also the excellent cooperation between the two companies that led to the rapid construction success. HUESKER, for example, was able to provide the structural calculations for the abutments, alkali-resistant Fortrac geogrids and nonwovens in a very short time thanks to its many years of experience. This was preceded in 2019 by a pilot project implemented by the HEITKAMP Group, a new bridge replacement construction over the A3 near Emmerich. It was accompanied by experts from the federal and state governments and the patented HEITKAMP Schnellbaubruecke® system used here was finally recognised as a standard construction method in Germany.

Today, modern structures have to do much more than be economical and quick to implement. In addition to high safety requirements, other factors such as sustainability play a significant role: Which materials are (re)used? What is the service life of the structure? How does it fit into nature and the habitat of the natural inhabitants? It is therefore not surprising that more and more solid construction methods are being replaced by alternative, more resource efficient solutions such as geosynthetic system solutions.

Where smooth concrete walls used to line the canals, geotextiles are now used, for example, where surface structures enable new habitats to settle, they can also have a regulating effect on the flow properties of the canal water or river. Dams and dykes are built in such a way that their surfaces can be overgrown and colonised by local nature, thus blending into the landscape as naturally as possible and also ensuring maximum safety. Even erosion-proof spillways and stormwater retention basins for hazard reduction during local heavy rainfall events are possible with geosynthetic building materials.

In direct comparison with conventional construction methods, build times can be shortened, a better environmental balance and higher longevity can be generated. The reduction of building materials, such as concrete or asphalt, and the reusability of existing soils not only conserve resources, but also require less transport, which makes the entire construction process significantly faster. Overall, the use of geosynthetics in flood protection enables numerous added values for people and the economy in reconstruction and flood prevention.